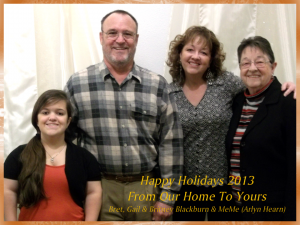 It is amazing how someone can feel perfectly fine on the outside, but secretly falling apart on the inside…  My case in point is my 88 year old Mom.  I have always said that she is the healthiest person I know – she grew up on a farm and presents herself much more like a 68 year old. Absolutely no one can believe her true age, not even her doctors.  In all her years she had never had surgery except for childbirth and cataracts.  In 2014 she triumphed over breast cancer like a champion! So imagine our surprise when she was rushed to the hospital for an emergency appendectomy in May of 2015! We were told how rare that was to happen at her age. She made it through the surgery just fine and miraculously came home the next day – little did we know what was going on behind the scenes.

Four days later she was readmitted back into the hospital with heart problems.  While in the hospital she developed 2 large bleeding ulcers that had to be dealt with before even looking at the heart.  She was in the hospital for 11 days before she could have an angiogram to determine what was going on heart-wise.  Then on Pentecost Sunday we discovered that her two main arteries were 95 and 85 percent blocked.  She went into cardiac arrest multiple times on the table, but thank God the cardiologist was able to revive her with the paddles 6 times.  She is now the recipient of two stents on her right side, but because the very fragile artery split in a spiraling fashion during the procedure, she has elected to not have an additional surgery on the left side.

I am constantly amazed by the divine timing of the Universe…  Mom was in the hospital for a total of 18 days that month and afterwards I found myself sinking into a depression worrying about her continued health, as well as my own (which I had never considered to be as good as hers).  Then a friend told me about the BEMER technology and what miraculous results her 6 year old son had after being diagnosed with lung problems.  I literally dropped everything and began researching as much as I could on the subject before I went to see it for myself.  Being a healer and intuitive, I immediately felt the benefit of this technology after only one 8 minute session, and I knew I had to do whatever it took to provide this benefit to my entire family.  My husband has had 2 traumatic brain injuries, our daughter has achondroplasia and hydrocephalus and has had 28 major surgeries, and I have a range of health issues myself – there truly is no limit to what benefits BEMER technology can provide by turning on your body’s natural ability to heal itself.

I would love nothing more than to help others discover this amazing, life-changing technology…

Find out more by clicking here!